Home » 12 Ways In Which Alcohol Impacts The Body
Learning

12 Ways In Which Alcohol Impacts The Body

Small amounts of alcohol – a glass of wine, a pint of beer, a shot of whiskey, here or there – aren’t too much of a problem, though any amount will still have an effect on the body. However, there are a few major ways in which excessive consumption can impact the body, leading to poor physical and mental wellbeing.

Today, we’re going to round up twelve of the biggest effects that alcohol can have on any given person, both physical and mental.

So let’s find out about the effects of alcohol on the body as we delve in to 12 of the most significant side effects.

Inflammatory damage is one of the worst, most common ways in which alcohol can impact the body.

Long term alcohol use interferes with one of the liver’s main processes – breaking down and removing harmful substances from your body (of which alcohol is also a prime candidate). Alcohol can increase your risk from chronic liver inflammation and liver disease. This inflammation causes scarring, called cirrhosis, the formation of which damages the liver and impedes it from its proper function.

Long-term use can therefore lead to a vicious cycle, in which your body is unable to properly remove it due to its effects, which will only get worse.

Liver disease is life-threatening as toxins and metabolic waste accumulate in your body. It is generally more acute in women than in men, though both can suffer.

Central nervous system (CNS) impairment is one of the most visible signs of alcohol use. That slurred speech, poor coordination, poor balance, and impaired reaction time that comes with drunkenness is all a result of alcohol reducing communication between your brain and body.

This all runs through the CNS, which alcohol damages over time. This can result in many of the above symptoms becoming more permanent, even without the presence of alcohol, and can also lead to either a tingling sensation or a lack of sensation in your extremities.

Drinking can also cause permanent brain damage. It can cause problems in long-term memory creation and retention. It can impair rational decision making and cause a lack of clarity. Over time, damage can occur to the frontal lobe, which regulates emotional control, short-term memory, and judgement, among other things.

Chronic alcohol misuse can cause permanent brain damage. In one of its more extreme manifestations, this can result in Wernicke-Korsakoff syndrome, which is a brain disorder that affects memory.

Alcohol overuse can lead to both physical and emotional dependencies on alcohol. Alcohol addiction can be devastating for your life and wellbeing; breaking free of it will generally involve specialist medical and professional help and can be traumatising – medical detoxification will often be required to get sober.

Alcohol withdrawal can be very dangerous in itself. It can lead to: 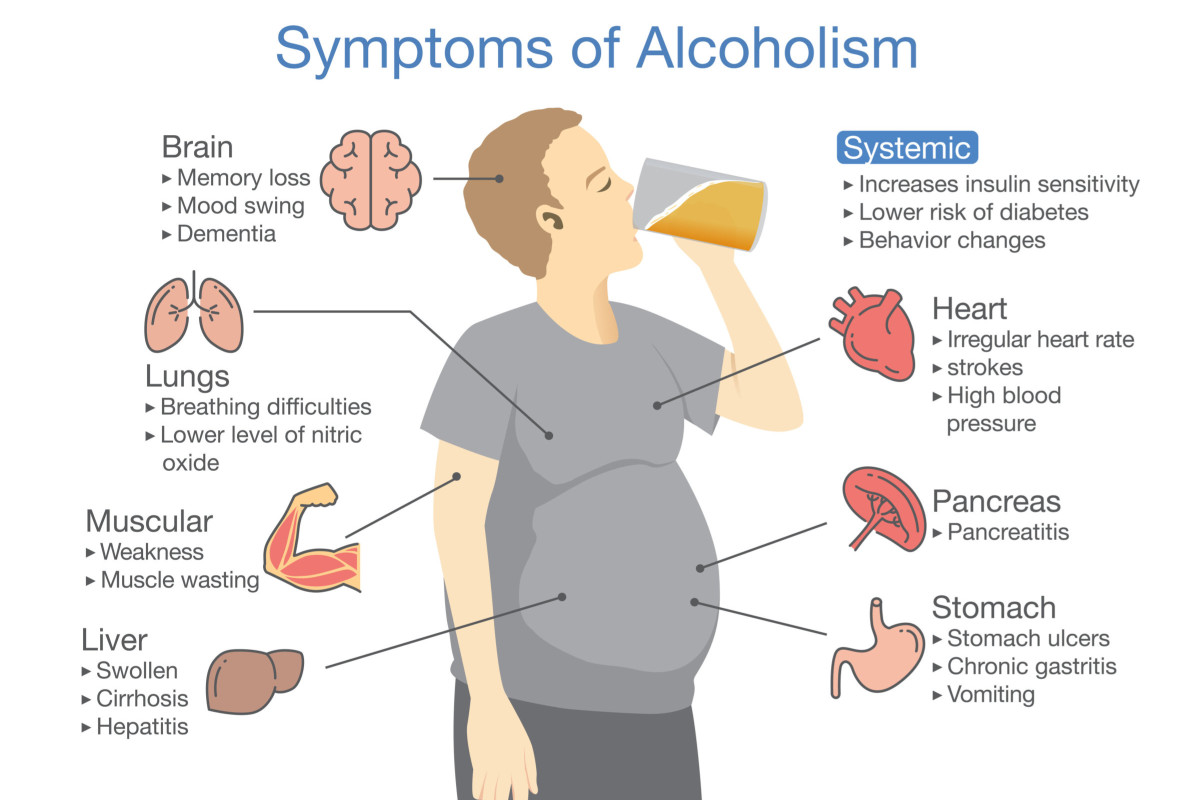 Excessive alcohol consumption can affect the pancreas, causing abnormal activation of digestive enzymes. Pancreatitis, inflammation due to a build-up of these enzymes, often follows.

As well as this, there can be some serious long-term, lasting damage caused to the tissues in your digestive tract. This can prevent your intestines from properly digesting food, limiting their capacity to absorb nutrients and vitamins. Malnutrition can occur.

In addition, difficulty in absorbing nutrients can lead to anaemia. This is a condition in which you suffer with low red blood cell count, and often presents as fatigue.

Heavy drinking can also lead to various short term digestive issues, such as gassiness, bloating, a feeling of abdominal overfullness, and diarrhoea or painful stools.

Dehydration and constipation caused by heavy drinking can commonly lead to complaints such as ulcers or haemorrhoids, which in turn can lead to internal bleeding. In fact, ulcers can often be fatal if not treated quickly.

Those who drink too much may also be at a heightened risk of liver and colon cancer.

Alcohol consumption can impact your heart and lungs.

Chronic alcohol drinkers will generally have a much higher risk of suffering from heart-related issues than they otherwise would, with the correlation being higher in women than men.

Drinking to excess can impede healthy immune function, making it far harder for your body to effectively combat invading germs and viruses.

It can also increase the risk of developing pneumonia or tuberculosis, with as many as 10% of all global tuberculosis cases being linked to excessive alcohol consumption.

Drinking alcohol can increase your risk of developing several types of cancer. This includes mouth, breast, liver, throat, and colon.

Alcohol consumption can greatly impair your sexual and reproductive health. Though small amounts may lower your inhibitions, making it seem easier to enjoy a full sex life, men who drink too much will be far more prone to erectile dysfunction. Excessive drinking can impact hormone production and impede libido.

Women who drink to excess can experience menstrual issues, with a complete menstrual cessation being quite common. This will increase the risk of infertility. Drinking whilst pregnant can heighten the risk of miscarriage, premature birth, or even stillbirth.

Foetal alcohol syndrome disorder (FASD) is also a concern in unborn children whose mothers drink during pregnancy. This can cause emotional and physical developmental difficulties, as well as learning difficulties.

The pancreas also helps to regulate your body’s response to glucose. It is key in controlling insulin use. When it isn’t functioning as it should, you will be susceptible to hypoglycaemia, or low blood sugar. Damage to the pancreas may also prevent you from producing enough insulin to make use of sugar, leading to hyperglycaemia, or too much blood sugar.

This can lead to complications related to diabetes. It is vital that those suffering with diabetes limit their alcohol consumption.

Long-term alcohol misuse may impact your bones and muscles. It can prevent your body from maintaining strong bones, leaving them thin and brittle, thus increasing your risk of fracture and breakage if you fall. Any injuries that do occur may additionally heal more slowly.

Alcohol misuse can also lead to cramping, muscle weakness, and atrophy over time.

Alcohol is a depressant. This means that it can upset the brain’s delicate balance of chemicals and processes, disrupting it in a way that will affect our thoughts, feelings, and actions. This can include impacting our long-term mental health.

This is in part due to its effect on neurotransmitters – chemicals that help to transmit signals from one neuron in the brain to another.

Heavy drinking is therefore associated with depressive symptoms – though it should be noted that cause and effect can often be hard to disentangle (are you depressed because you drink, or do you drink because you are depressed?) Alcohol affects several nerve-chemical systems within our bodies that serve to regulate our moods, meaning that depression can often follow from excess drinking. This can come hand in hand with other negative emotions such as anger, aggression, and anxiety.

Quantity and time are both important. The more we drink, and the longer, the more our brain functions are impacted.

It can be quite common for social drinkers to use alcohol to ease anxiety. It can calm the nerves, so to speak.

However, any calming effect will be temporary, caused by similar chemical changes in the brain as those noted above. They will wear off quickly. This means either facing anxiety or reaching for another drink, which can lead many people to dependency, alongside an increased tolerance for alcohol. A pattern emerges as you drink more and more to feel the effect, relying on alcohol as a crutch to boost your confidence.

This can be self-defeating as well as unhealthy. Alcohol can actually increase feelings of anxiety in many instances. Drinking allows for a degree of disconnection. Sometimes this can be healthy. However, it means that we often become ignorant to social cues. If somebody is prone to anxiety, they may tend to ignore many less threatening, neutral cues and information, rather zoning in on something that could be taken as threatening.

It is a form of tunnel vision for those who could really do without it.

Hangovers have also been associated with increased anxiety. It is often minimal, but in those already struggling with anxiety, the effects can be quite drastic.

The odd drink isn’t an issue for most people. Unless you have a history of alcoholism, either in yourself or your family, have any kind of medical complications that make drinking unwise, or are on any kind of medication that can interact badly with alcohol, you should be OK with a couple of drinks every so often.

However, if you experience any of the above side effects, it could be a sign that you’re drinking more than is healthy. This could be because you are drinking excessive amounts, or because you are simply reacting poorly to moderate amounts. Either way, it would be wise to curtail your drinking, or even stop altogether.

If you have any concerns about alcohol’s effect on your body – on your physical or mental health – always seek medical advice. Your doctor or healthcare provider will be able to give you all the information you need, based on your own medical background and history. 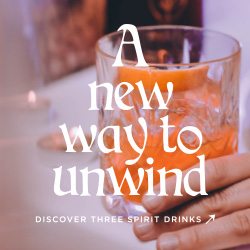